Kalamazoo's City Commissioners are the elected representatives of the citizens of Kalamazoo. The Commission provides leadership and policy direction for the community and all municipal government activities with a focus on the long-term financial stability of the City and the identification of community priorities. The City Commission consists of five Commissioners, the Vice Mayor, and the Mayor.

City Commissioners can be contacted directly as indicated below or by contacting the City Managers Office at 269-337-8047. Correspondence may also be sent to City Hall at 241 W. South St., Kalamazoo, MI 49007. 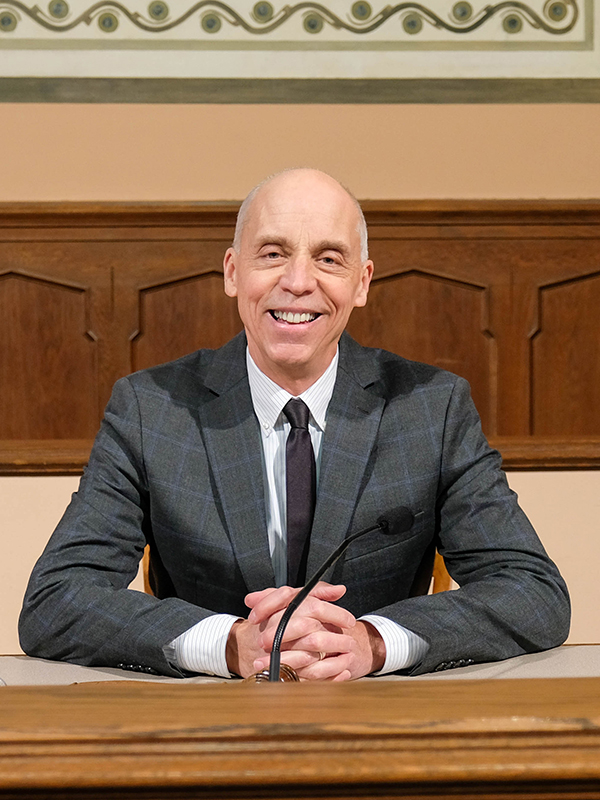 In addition to serving on the City Commission, Mayor Anderson serves as a volunteer board member of the LIFT Foundation and as a member of the Kalamazoo County Public Housing Commission.

Mayor Anderson is married to Cori Terry of Wellspring/Cori Terry & Dancers, a Kalamazoo-based modern dance company located in the Epic Center in downtown Kalamazoo. David and Cori are the parents of four grown daughters, all of whom are graduates of Kalamazoo Central High School. 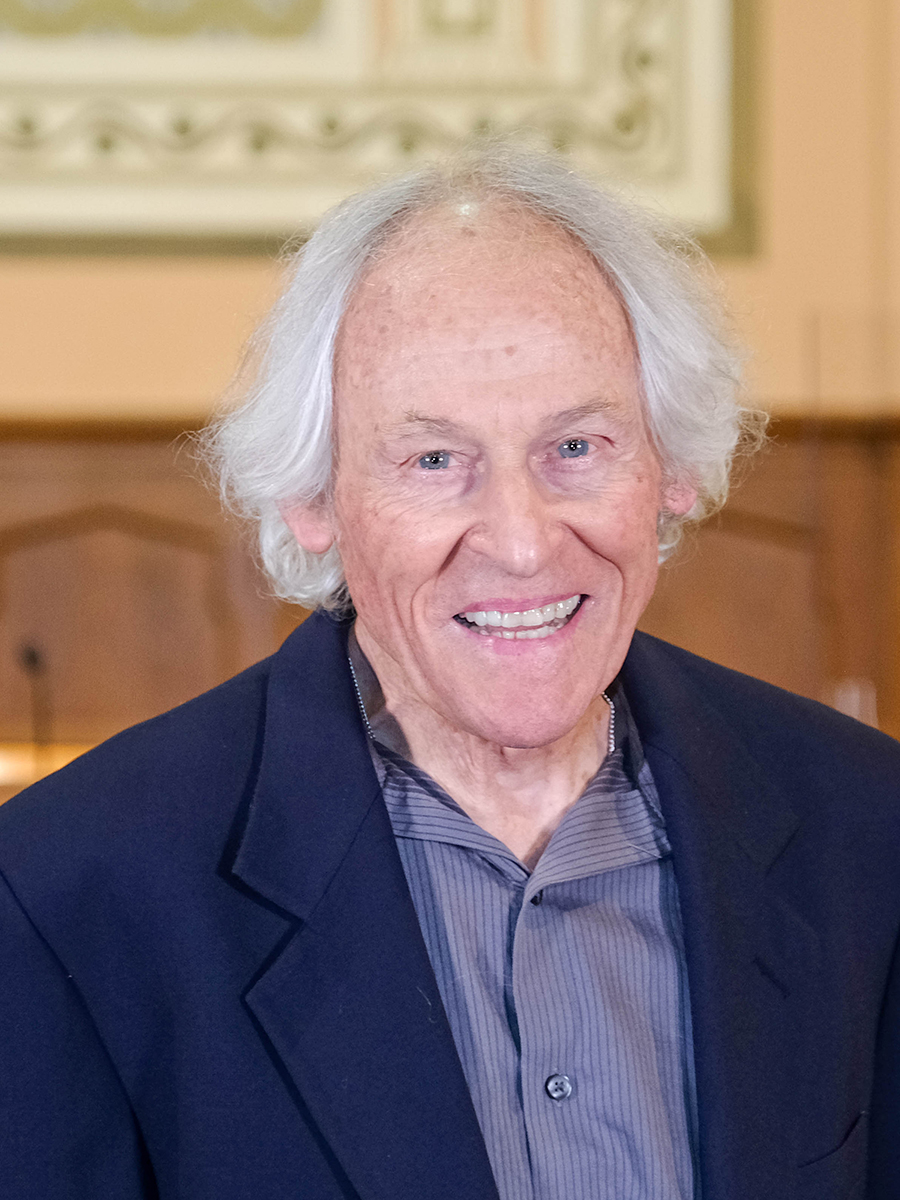 Don Cooney is serving his 11th term as a City Commissioner and 2nd term as Vice-Mayor. He has been married for 29 years to Kathleen Cooney, a social worker at Family and Children Services. They have an adult son named Nathaniel. Cooney is an associate professor in the School of Social Work at Western Michigan University where he has taught for 45 years. He has a master's degree from Mary Immaculate Seminary, a master's degree from Fordham University, and a Ph.D. from Bryn Mawr College. He was a leader in starting Kalamazoo Communities in schools and Shared Prosperity Kalamazoo. 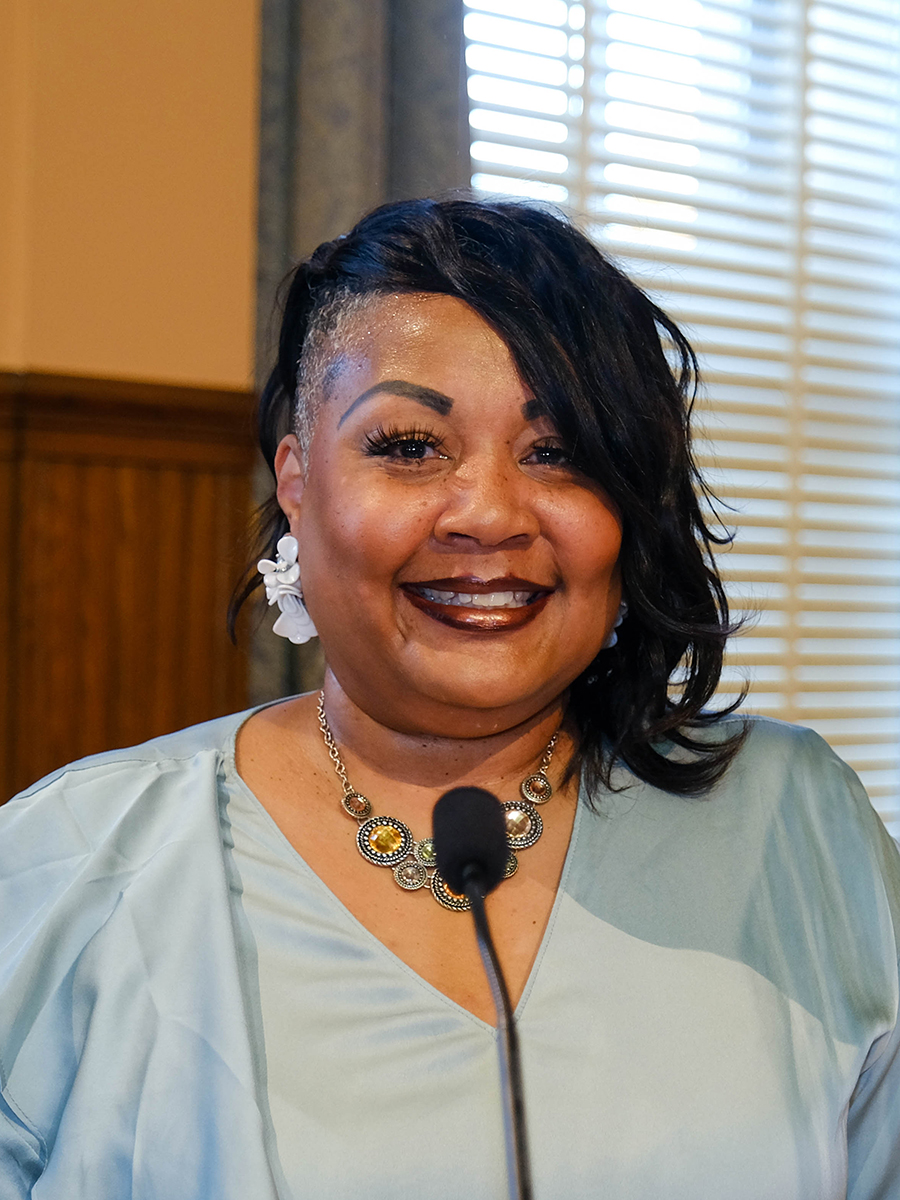 Commissioner Hoffman is a change agent. She serves historically underrepresented and under-served community members to ensure that they are treated with the dignity, respect, and love every human being deserves. She understands the intersectionality of race, ethnicity, socioeconomic status, sex, gender identity, sexual orientation, and disability. Her passions are housing, pay equity, and anti-racism.

One of Commissioner Hoffman goals is to create understanding in the broader community that housing is a human right. She believes that as Kalamazoo continues to grow as a community, we must invest even more in our core neighborhoods by providing affordable, permanent housing that includes home-ownership opportunities. She also believes we must make all our areas safe, and the gun violence plaguing parts of our city must be addressed at its root causes. Every child deserves a safe neighborhood to play, learn, and grow.

Drawing on the lessons learned in 2020, Commissioner Hoffman is committed to dismantling systems that do not serve our community’s highest good. Respectful race relations and building confidence in our city’s government are paramount. Her heart and passion can help build a culture in government whereby our residents can trust that leadership is committed to the people.

Commissioner Hoffman is also dedicated to creating anti-racist policies and systems that include all residents, particularly our marginalized and invisible members in our community. As the City of Kalamazoo addresses current policies and procedures internally, we can begin the work of genuinely building a city where all residents can thrive and not just survive. 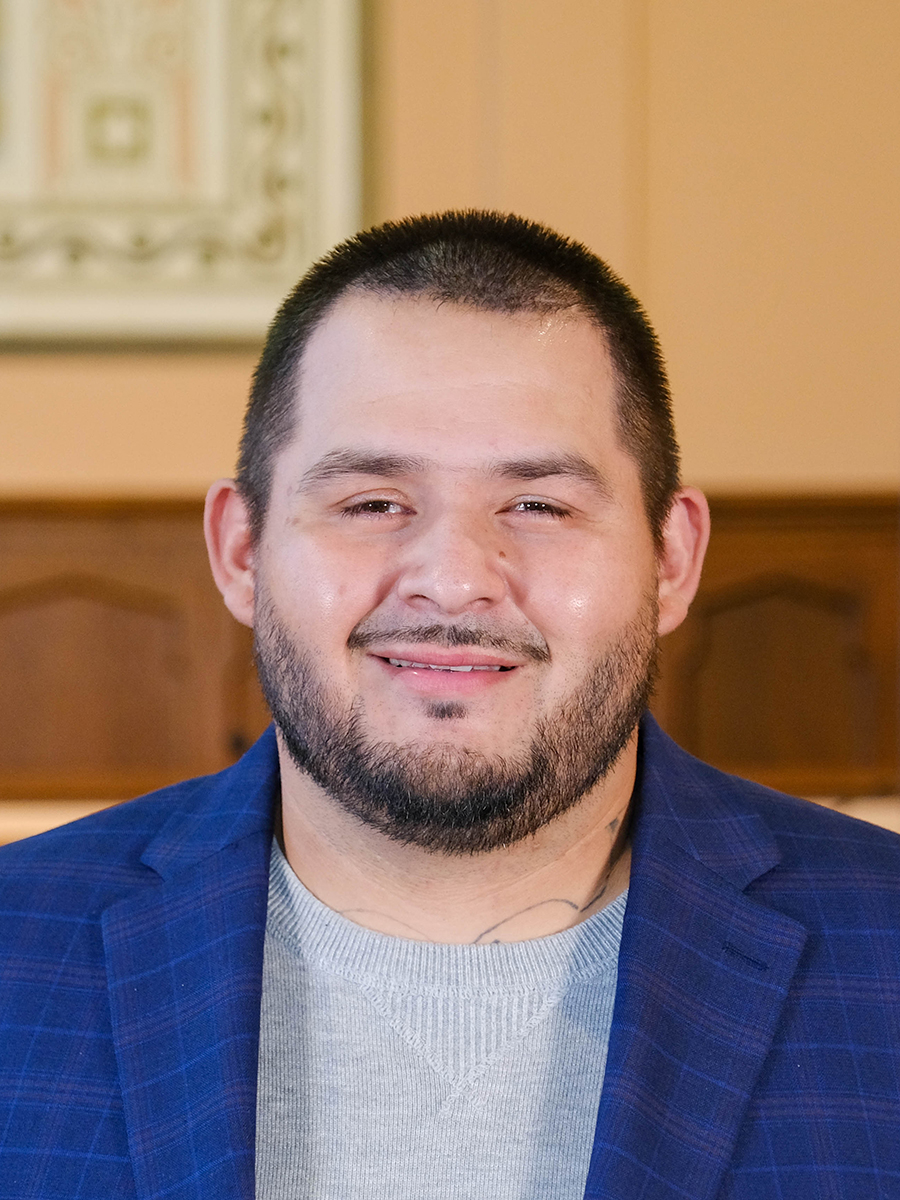 Esteven Juarez is a life long resident of Kalamazoo. He began getting involved in his community through street ministry efforts in 2008. Since 2013, Esteven has served as one of the lead Pastors at Vanguard Church located within the inner city of Kalamazoo. He is employed at Urban Alliance Inc., a community-based non-profit in which he is the Director of Outreach.  Esteven serves on the Executive Committee of GVI (Group Violence Intervention), a deterrent program to stop gun violence in the greater Kalamazoo area. As an individual who has overcome a difficult and traumatic childhood, Juarez is passionate about collective impact and transformation.

Esteven is married to Ariel Juarez. They are parents to a daughter and two sons whom attend schools in Kalamazoo. He enjoys coaching his sons’ Rocket Football team for Kalamazoo Christian United. 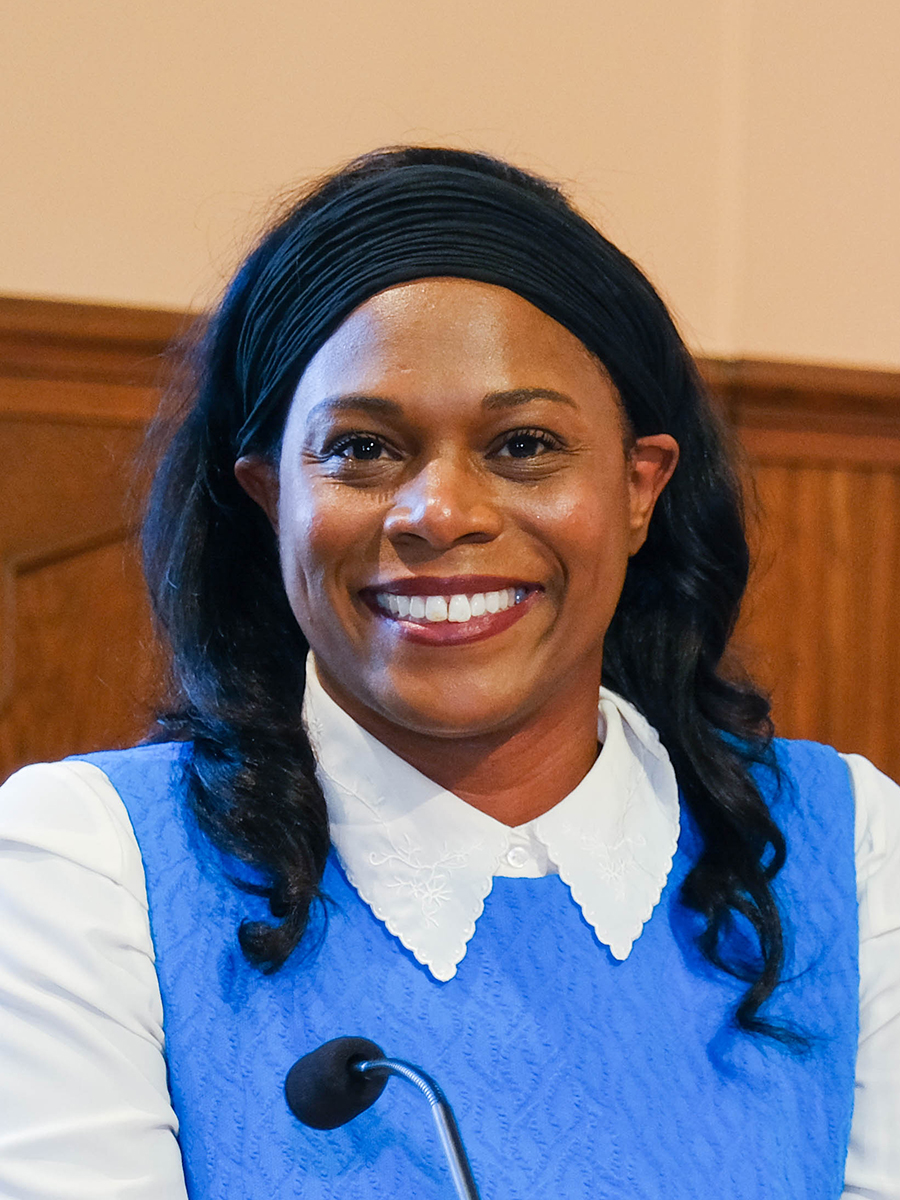 Qianna Decker, a lifelong resident of our city, is a graduate of Loy Norrix and Kalamazoo Valley Community College.

Her career ambitions led her to 15 years in banking, where she developed her passion for creating financial literacy for all. In 2014, she shifted her sights to the mortgage industry and helping people find pathways to home ownership. In addition, her entrepreneurial spirit led her to start a successful home rental business in 2019 and acquired her real estate license in 2021.

Qianna is an active member of the Kalamazoo County Land Bank board, where she develops ongoing seminars that bring local businesses together to educate the community. She serves on the Affirmative Action committee, which addresses disparities in homeownership for people of color and low-income residents. Additionally, she is a member of the Diversity, Equity and Inclusion committee, which aims to shift community engagement from being simply inclusive to being truly empowering. In this role, she provides platforms and initiatives for community leadership, develops approaches to real estate transactions, and creates opportunities for neighbors and residents to get involved.

Qianna is also dedicated to family. She and her husband, Douglas, live in the Westnedge Hill area with their son and daughter, who are enrolled in Kalamazoo Public Schools. You can find them on the soccer field or watching little league games, cheering on their kids. Qianna’s parents migrated from Fort Valley, GA in the 1970s and have called Kalamazoo home ever since. She says her mother instilled in her the quality of working hard and for what you believe in – and she intends to do that for our city. 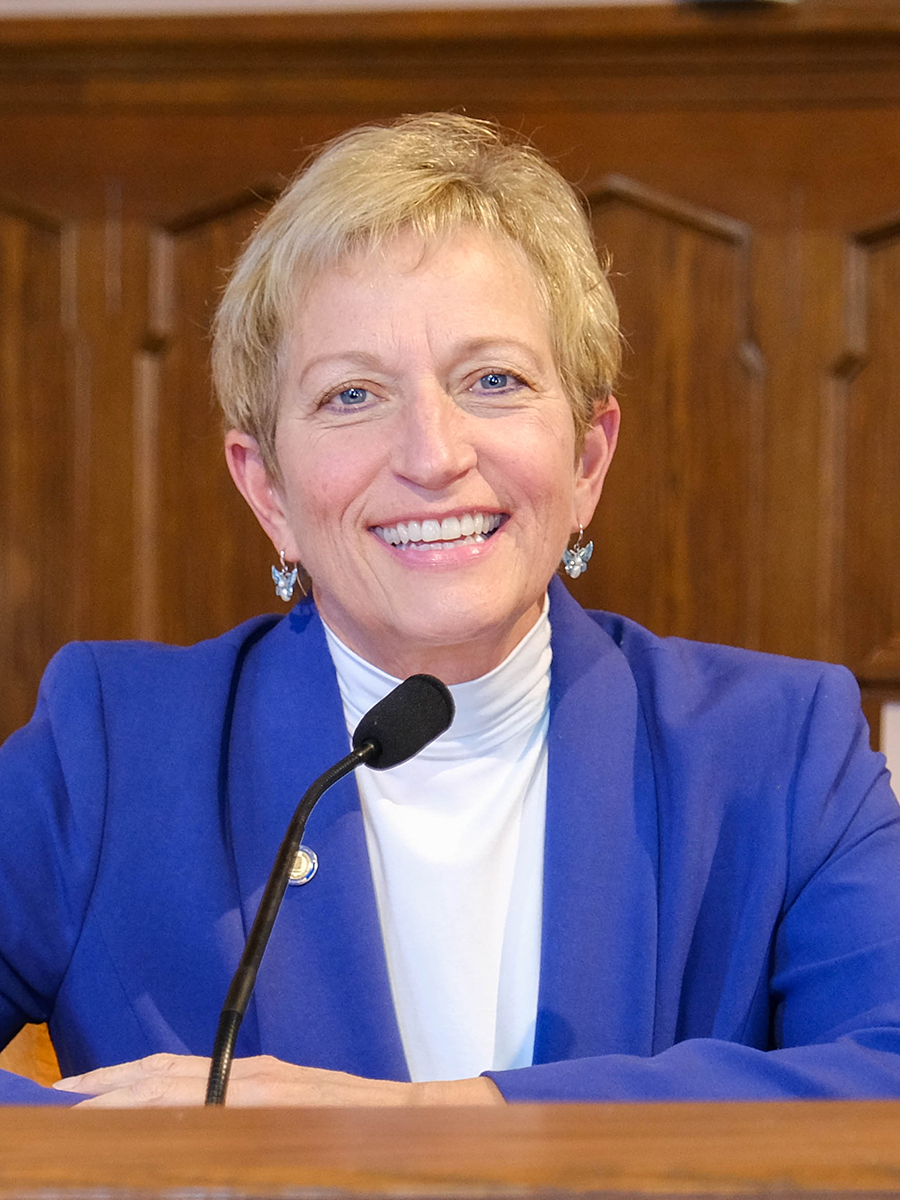 Commissioner Jeanne Hess retired in August 2019 after 35 years as professor and chair of the Physical Education Department, and Volleyball Coach at Kalamazoo College. During her career, she spent time as assistant basketball coach, assistant softball coach and associate chaplain. Commissioner Hess was also involved in VISIONS, ERACCE, and Green Dot training at the college.

Jeanne earned her B.S. from the University of Michigan, where she was a member of the Wolverine volleyball team for four years. She went on to earn her M.A. in Exercise Science at Western Michigan University; a prelude to her teaching and coaching career at Kalamazoo College. WMU inducted her into the Alumni Honor Academy for Health, Physical Education and Recreation in April 2010. In 2014, Kalamazoo College awarded her the prestigious Lux Esto Award of Excellence, which honors an employee who has served Kalamazoo College for 26 or more years for a superlative record of stewardship and innovation. She also received the Frances Diebold Award for outstanding service to the community in June of 2000.

She sports five MIAA championships, six NCAA Division III Tournament appearances, and has been named regional coach of the year twice in 1990 and 1991. She has led her team on four international touring, competition, and service trips to China, Costa Rica, Trinidad, and South Africa.

Hess published her first book, Sportuality: Finding Joy in the Games in 2012, and MaxAbility: Who Are You and What Are You Here For will be published in 2019. In addition to her work as an author, Jeanne serves as an officiant for celebrating life transitions. She serves her faith community of St. Thomas More Student Parish, and volunteers with the Kalamazoo Gospel Mission, Ministry with Community, Diaper Bank of Kalamazoo, Habitat for Humanity, United Way, and Kalamazoo Communities in Schools.

Hess and her husband, Jim, reside in Kalamazoo, where Jim is a residential realtor with Jaqua Realtors. They have two sons, Andrew and Kevan, who graduated from Kalamazoo Central High School. Andrew played baseball at the University of Michigan, and Kevan played baseball at Western Michigan University. Both were drafted by the Detroit Tigers, where each played in the minor leagues for 3 years. Following his athletic career, Kevan chose to make his home in Kalamazoo, where he is a realtor at Jaqua Realtors. Jim and Jeanne are now proud grandparents of three. 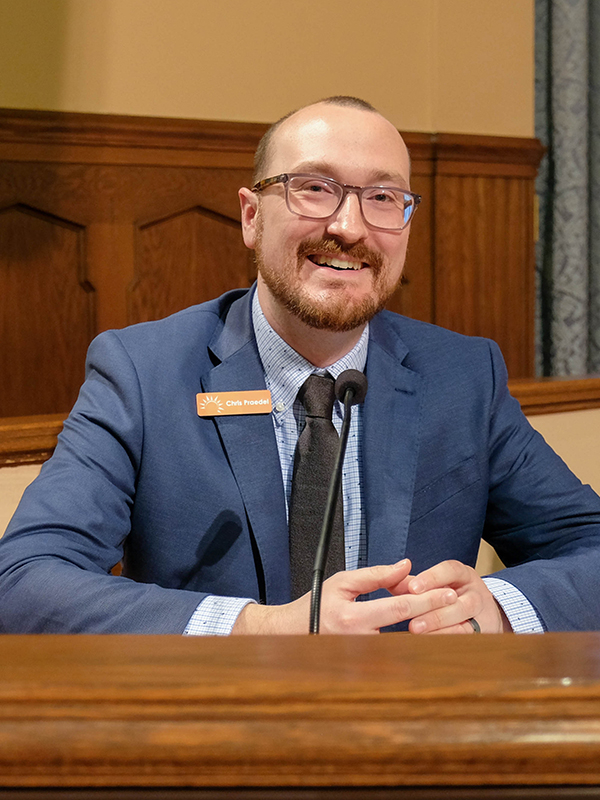 Chris Praedel was first elected to the Kalamazoo City Commission in November 2019. He is serving the second half of his four-year term. He has served as liaison to the Planning Commission, Kalamazoo Area Transportation Study (KATS), and the Pension Board.

His roots run deep. He was born and raised in Kalamazoo. He is a proud graduate of both Kalamazoo Central High School and Western Michigan University, earning a BA in Management. He also attained the rank of Eagle Scout in local Troop 205.

Chris currently resides in the Milwood neighborhood with his partner, Erin, and three boys: Lincoln (7), Simon (5), and Felix (1). They are animal lovers and have a goldendoodle named Roz and a cat named Iggy.

Chris is especially passionate about literacy and our youth in our community.

Immediately following graduation, he committed to two-years of national service in the Americorp program, Teach for America. He taught in a self-contained third grade and technology classroom in South Chicago and Los Angeles during his service term. He also earned an MA in Teaching from Dominican University. He has mentored two area teenage boys through Big Brothers Big Sisters.

Since 2011, he has remained active in the Kalamazoo Literacy Council (KLC), serving in numerous capacities from Board President (2012-2013; 2014-2015), Annual Campaign Chair (2013, 2015), and numerous subcommittee chairs. The KLC is a nonprofit volunteer tutor organization dedicated to enhancing the lives of adults who struggle to read. He was honored by the organization as the 2016 Literacy Advocate of the Year.

Chris has remained active in a number of other area non-profit organizations, including serving as the fund development chair of the Kalamazoo Promise’s 10th Anniversary Celebration, to provide programming to celebrate Promise students, educators, and the greater community. Chris also currently serves on the 60th State Representative District Service Office (DSO) and Community Services Charity (CSC) Board of Directors, where he serves as treasurer Most recently, he is working with a group of local history enthusiasts on the Kalamazoo Abraham Lincoln Institute (KLI) to commemorate Lincoln’s only visit to Michigan in 1856.

In 2015, Chris was appointed to the City of Kalamazoo’s 21-member Blue Ribbon Panel on Revenue. The Panel was instructed to research, study, and explore revenue options that, when considered together, would address the City’s General Fund structural budget imbalance.

In 2016, Chris successfully organized a Guinness World Record attempt in 2016 for the most marriage vow renewals in one place at Western Michigan University. During his tenure at WMU, was honored with the 2018 WMU Spirit Award and 2017 Make A Difference Award, both peer-to-peer honors.

The City Commission appoints and directs the activities of the City Manager, City Attorney, City Clerk, City Assessor and Internal Auditor. The Commission also appoints members to Kalamazoo's various boards and commissions, which serve an advisory role to the Commission.

As required by the City Commission rules, a pdf schedule of regular meetings (74 KB)  is established and published before January 1 of each year. The City Commission typically meets on the first and third Monday of each month, although the schedule is subject to change due to holidays and special meetings.

The City Commission has established bylaws or pdf rules (41 KB) governing its meeting procedures, citizen advisory boards and commissions, the assignment of Commissioners to committees and subcommittees, and other administrative matters. These rules are available pdf here (41 KB) .